Thalea Quartet Gets Weird at SXSW 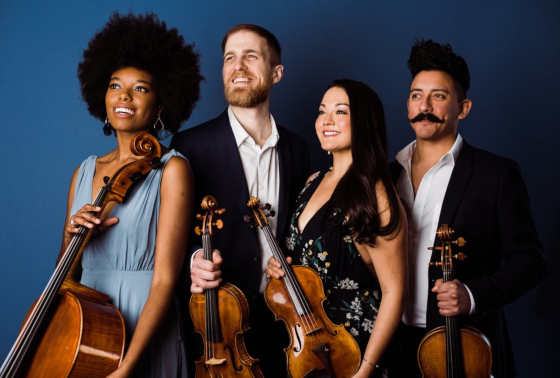 One of Austin’s newest and most-active string quartets is finally making their SXSW debut.

The 5th annual SXSW ATX Composers Showcase will kick off March 13 at the Parker Jazz Club, boasting the best in Austin’s ever-expanding classical scene. Among the evening’s performers is the Thalea String Quartet (pronounced TAH-lee-uh), who arrived in Austin this past fall as the next participants in the University of Texas’ Young Professional String Quartet program.

“Everyone’s been great here,” says the quartet’s violist Luis Bellorín. “Being able to fly the Longhorn flag and have that position puts you on the radar of a lot of people very quickly.”

Formed in the summer of 2014, Thalea String Quartet has studied and performed around the world, sharing the stage with high-profile artists like Caroline Shaw and the Borromeo Quartet. Between their work at UT, participating in several other residences, and consistently touring, the group keeps very busy.

“I see these folks more than I do my two cats at home,” Bellorín says of his fellow quartet members.

“We tour, rehearse, we travel together—we’re a family, you know?”

In moving from San Francisco to Austin in 2018, the Thalea String Quartet is aiming to continue their mission of expanding the influence of chamber music by creating dialogues and engaging with their audiences. Bellorín says that breaking down traditional barriers is vital to their approach of communicating the passion and human aspect of music, both new and old.

“We love to be on stage and have the spotlight on us, but when we’re playing for people that are coming for the first time, we find that it’s so much more engaging to be up close and personal with them,” he says.

“Not a concert goes by that we don’t speak or explain the works, but it’s never in a technical manner, mostly on an emotional level—we think that’s really important.”

As part of their UT residency, Thalea is being mentored by the world-renowned Miró Quartet. In addition to having solo and group practices with the Miró Quartet, Thalea is also learning the logistical ins-and-outs of how to thrive as an ensemble, including programming their music not just for the next year, but for the next three.

“I think we get the best of both worlds,” Bellorín says of Thalea’s mentors, “in a practical sense with our instruments and also from a business development sense as well.”

For the Composers Showcase, Thalea will perform Vincent Calianno’s A History of the String Quartet in its Natural Habitat — marking its first ever performance in Texas. The piece was commissioned by Thalea in the summer of 2016 and was premiered in 2018 at San Francisco State University. In A History of the String Quartet, Calliano tests the bounds of genre within the string quartet structure by adding waves of electronic samples, spoken word monologues, and synths, all of which both compliment and clash with the strings, creating a seamless yet dynamic effect.

As many of Thalea String Quartet’s prior commitments begin to wind down this spring, Bellorín says that the group looks forward to further collaborating with their fellow local musicians, expanding into new audiences, and continuing to be ambassadors for string quartet repertoire in Austin.

“We’re a very open group of people and we like to get weird,” says Bellorín.

“It got me when I read ‘Keep Austin Weird’—I thought, ‘that fits us perfectly!’”