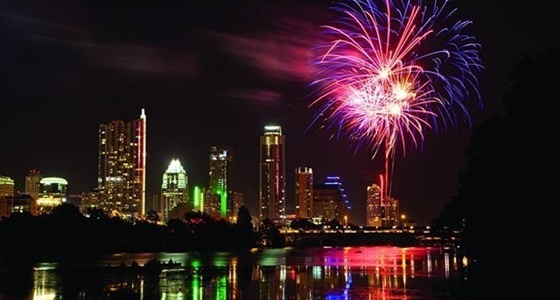 In addition to lots of great American music on Sunday July 4, KMFA is pleased to present To Honor and Inspire at 9:00 PM. Andria Blain hosts this patriotic encore special, featuring performances by the United States Army, Navy, Air Force and Marine bands, in an hour of music, including marches by Sousa, Jewell and Gould, and classical works by Copland, Saint-Saens and Holst.

Where to Celebrate Around Austin | Saturday, July 3

Round Rock is keeping its party going for over 12 hours with its Sertoma Independence Day Parade and Frontier Days events, both taking place on July 3. The parade kicks off at 8:30 a.m. and will follow a 1.5 mile route along Mays Street. Frontier Days will take place at Old Settlers Park starting at noon and features carnival rides, racing pigs, a pepper eating contest, free ice cream, and a fireworks display at dusk, which will be followed immediately by a performance from Uptown Drive.

Get in your science fiction double feature at Doc’s Drive-In this Fourth of July weekend. On Saturday, July 3, and Sunday, July 4, the Buda drive-in will put on a fireworks display and concert right before showing the sci-fi action flick “Independence Day” and summer comedy “The Sandlot” on separate screens. Live music will kick off the event on both nights at 7 p.m., followed by fireworks at 9 p.m. and both movies at 9:30 p.m. Food and drinks are available for purchase.

Need an extra night of fireworks? Nutty Brown Amphitheater has you covered. The live music venue, located just off West Highway 290, is hosting Austin musician  Bob Schneider for an Independence Bash on July 3. The ticketed event will feature a concert from Schneider and openers Lex Land and Danny Malone, and of course, a fireworks display, with food and drinks for sale.

Cool down with a water slide and cold beer in Elgin

In case you missed it, it’s hot. So what better way to enjoy a fireworks display than from a water slide? The Elgin Veterans of Foreign Wars is hosting an Independence Day celebration on July 3, starting at 5 p.m. at 118 Sayers Road. In addition to the water slide, you’ll be able to enjoy live music, cold beers, food and a bouncy house throughout the evening along with the fireworks.

Watch fireworks from a wave pool at Typhoon Texas

Beat the heat by jumping into a wave pool to watch fireworks at Typhoon Texas, Austin’s waterpark. The park is hosting its annual Red, White and BOOM festival the entire Independence Day weekend, July 2-4. The fireworks display will take place at 9:30 p.m. July 3 and can be viewed from anywhere in the park.

Where to Celebrate Around Austin | Sunday, July 4

Fireworks and an orchestra on Lady Bird Lake

Since the 1970s, Vic Mathias Shores has drawn masses of spectators to Lady Bird Lake for a dazzling fireworks display. H-E-B and the Austin Symphony join forces to put on this classic show, which will be set to patriotic music, feature guest speakers, and host vendors selling food, drinks, crafts and memorabilia. The program starts at 8 p.m. at Vic Mathias Shores, across Riverside Drive from the Long Center. Free to attend.

Activities for the whole family at Hill Country Galleria

Just outside of Austin in Bee Cave, Hill Country Galleria is putting on a family-friendly Independence Day celebration. From 4 p.m. to 10 p.m., the mall is hosting an array of artisan vendors, a lineup of local acts including Fastball, Vallejo and the Deer, and rides for kids. The family event is topped off with a fireworks show; bring a blanket or chair to watch from the mall’s grassy lawn.

If you're looking for a small town vibe to accompany your fireworks, drive over to Georgetown, which will host its 38th annual July 4 celebration at dusk. Although the city’s annual parade has been canceled, fireworks still will fill the skies above McMaster Athletic Fields on North College Street around 9:15 p.m. The best place to catch the show is San Gabriel Park, but they can also be spotted from parks around Georgetown.

Fireworks and an outdoor movie in Cedar Park

Tired of Netflix? Get off your couch and visit Cedar Park for a fireworks display followed by a movie night this July 4. Food trucks will start setting up at Milburn Park at 5 p.m., where you can bring a picnic blanket and enjoy music before the fireworks show, which will happen at 9:15 p.m. Afterward, Cedar Park will be hosting a screening of “The Sandlot,” the 1993 baseball comedy classic.

Parades are a thing again! Wells Branch is bringing back its annual FourthFest this summer, a parade with floats and festivities. The event starts at 10 a.m. July 4 in Katherine Fleischer Park, and kicks off a day of festivities that includes a summer concert at the soccer complex and evening fireworks you can watch from the park.

Make sure to reserve your free tickets in advance for Leander’s Liberty Fest at Lakewood Park, the city’s largest annual celebration. The festivities include food, activities for kids and live music. The concert kicks off at 4:30 p.m. July 4 with Suede, followed by Reckless Kelly and Granger Smith. Hours of celebration and entertainment will be topped off with a fireworks display at 9 p.m.

Celebrate with Red, White and Buda

Buda is back this summer with an Independence Day parade and celebration with food, entertainment and fireworks. The parade kicks off at 8:30 a.m. on Main Street, with awards ready to honor the best decorated bikes. Evening festivities get started at 7 p.m. at Buda City Park, with fireworks lighting up the skies at 9:30 p.m.

Fireworks and food trucks in Hutto

The City of Hutto is hosting their third annual Fourth of July celebration at Brushy Creek Amphitheater. The event has something for the whole family: food trucks, live music from the Peterson Brothers and Mia Garcia, activities for kids, and fireworks. The event is free, but tickets are required to attend.

Fireworks at Dreamland in Dripping Springs

Viewing will be from the main stage starting at 10 p.m. The outdoor venue will have food and drink specials all day and recently installed a new Splashpad.

Fireworks at the Dell Diamond

The Round Rock Express will play the Sugar Land Skeeters at 6:05 p.m., and the team promises the largest post-game fireworks show of the season. The light show will be set to patriotic music, and the first 7,000 fans will get a mini American flag.