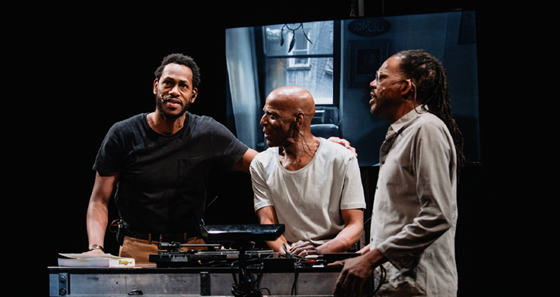 Influential and trendsetting, legendary and revolutionary, The Wooster Group is a New York City-based experimental theater company directed by Elizabeth LeCompte since its founding in 1975.  Their productions tour nationally and internationally, though have never been presented in Texas until now.  In January 2022, the Wooster Group will make their long-overdue Texas debut with a two-week residency for Texas Performing Arts’ 40th Season.  The Wooster Group will present a full production and present work-in-progress showings of a second work in the McCullough Theater, which will be transformed in to a black box-style theater with all audience seating on the stage.

THE B-SIDE is an original production based on the 1965 LP record Negro Folklore from Texas State Prisons, which features work songs, blues, spirituals, preaching, and ‘toasts’ from inmates in Texas’ then-segregated agricultural prison farms.  Performer Eric Berryman plays the album, and along with performers Jasper McGruder and Philip Moore, channel the inmates’ voices, via in-ear receivers, recreating them live.  Berryman also provides context from the book Wake Up Dead Man: Hard Labor and Southern Blues by Bruce Jackson, the folklorist who recorded the album at the prison in 1964. THE B-SIDE is directed by long-time Group member Kate Valk and designed by Elizabeth LeCompte.

The production was a New York Times Critics Pick, was nominated for a 2019 Drama Desk Award for Unique Theatrical Experience, and was included in ‘Best Theater of The Year’ lists in The New York Times and The Washington Post.

KMFA Classical 89.5 is proud to be a media partner for the Texas Performing Arts 40th Season.