A Film by Bernadette Wegenstein 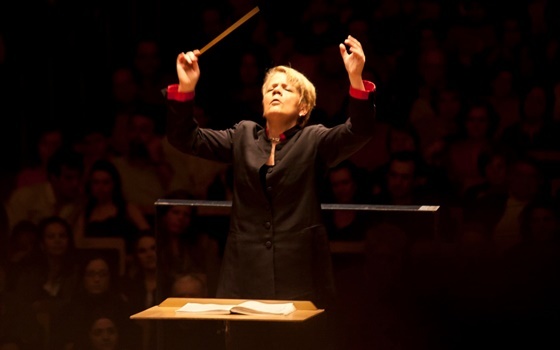 The Conductor takes the audience into the heart of classical music, and into the soul of one of its top artists, the internationally renowned conductor Marin Alsop — the first woman to serve as music director of the Baltimore Symphony Orchestra, the São Paulo Symphony Orchestra, and the Vienna Radio Symphony Orchestra — giving us backstage passes to the artistry and energy that rewards her audiences and inspires her students. With unprecedented access, the director and film crew accompany Marin Alsop to concerts around the world from Mozart’s Magic Flute in São Paulo, to Mahler’s 1st Symphony in Lucerne, to Bernstein’s Mass in Baltimore, and her opening concert in Vienna.

KMFA's Dianne Donovan spoke with director Bernadette Weigenstein recently before the Texas premiere of the film at AFS Doc Days presented by Austin Film Society. Click on the LISTEN button in the upper righthand corner of this page to listen to the interview.

Watch the Official Trailer below: