FROM STAGE TO SCREEN 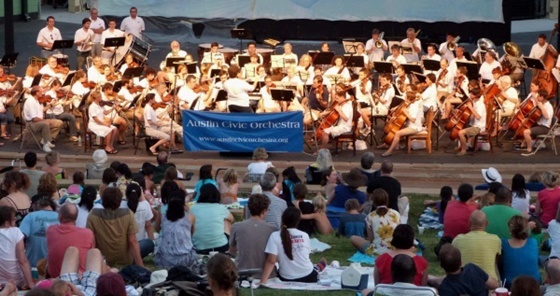 Join the Austin Civic Orchestra for this free concert at the Zilker Hillside Theater. This year we feature the music that made a successful transition from the stage as a musical to a full screen movie.  Bring your blanket or low chair with plenty of water to sit on the hillside in the setting sun to enjoy the concert.

As is the tradition, we end with Sousa’s The Stars and Stripes Forever conducted by the raffle winner.  This could be you!

The program includes selections from :

The Austin Civic Orchestra (ACO) is a non-profit civic organization that has been around since 1977. The ACO is devoted to bringing high quality music to the community and providing a musical outlet for professional and non-professional musicians alike. The ACO performs six to eight concerts each season, all of which offer programming to suit a wide variety of musical tastes, from traditional classics to pops and most everything in between. Presented at assorted convenient locations in the Austin area, the relaxed atmosphere and affordable cost have proven appealing to this community.