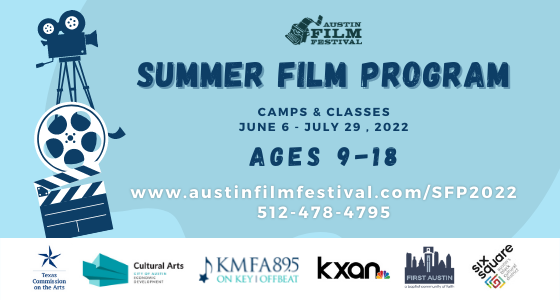 Surround your young writer or filmmaker (ages 9-18) with like-minded collaborators as they are guided by professional instructors who help ignite their creativity, inspiration, and learn essential screenwriting, filmmaking and editing skills.

Since their inception in 1994, Austin Film Festival have used their mission – to further the art and craft of storytelling by inspiring and championing the work of writers, filmmakers, and all artists who use written and visual language to tell a story – as the guiding principle throughout their history and growth. They were the first organization of its kind to focus on the writer’s contribution to film and television, and they pursued this focus with the intention of creating not only a community for writers to engage with one another, but to build a bridge from craft to career.  They have been lucky enough to build a family of storytellers from multiple mediums, who come together in both a pursuit and celebration of story.

Currently in their 29th year, they are best known for their annual Film Festival and Writers Conference held each October in Austin, Texas. This event plays host to the largest screenwriters conference in the world, featuring over 200 panelists and panels that, along with film and television, now also explore storytelling mediums such as plays, podcasts, and digital series. Partnered with a film program that has welcomed artists on the frontlines of shaping culture, AFF are proud not only of their festival’s ability to celebrate story at such a scale, but the opportunities it provides for story development and career advancement. Austin Film Festival were the first festival and conference to highlight the artistic achievements and contributions of the television writer and have since continued to acknowledge the medium’s writers and their importance in shaping the landscape of storytelling as a whole.