PREVIEW OF A TRIBUTE TO JUDY GARLAND 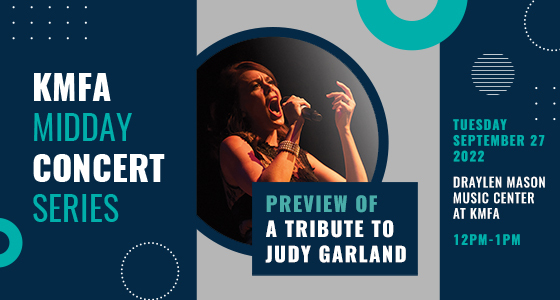 Vocalist Natasha Drena will highlight the 45-year career of Judy Garland with the Austin Symphony Orchestra at an upcoming Sarah & Ernest Butler Pops concert at the Long Center.

You can get a preview of the full concert at a FREE Midday Concert on Tuesday, September 27 in the Draylen Mason Music Studio at KMFA! Drena will be on hand to perform a few of her favorites and chat with KMFA's Dianne Donovan about the show. The noontime concert is free when you RSVP in advance below.

About A Tribute to Judy Garland:

With a career spanning 45 years, Judy Garland was in the hearts and homes of millions of people. She was featured in numerous musicals and movies, as well as theater and television shows. Your Austin Symphony Orchestra, along with vocalist Natasha Drena, will celebrate the 100-year anniversary of Judy’s life. Come hear some of your favorite songs including, “Over the Rainbow,” You Made Me Love You," “Stormy Weather,” “Come Rain or Come Shine,” “When You’re Smiling,” and more.

Tickets and more information about this ASO Sarah & Ernest Butler Pops concert can be found here.