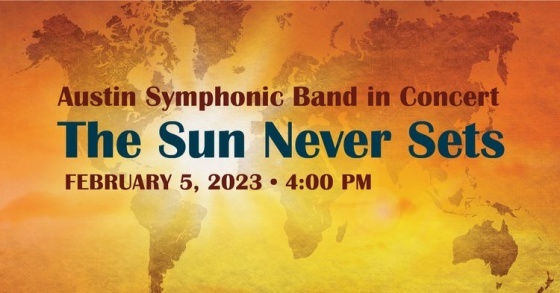 Take a musical tour of the vast British empire as we perform selections by Holst, Arnold, Vaughan Williams and Grainger, as well as new music by Cait Nishimura and David Stanhope. We close the concert with the instrumental setting of the great comic ballet Pineapple Poll by Arthur Sullivan, which will surely send the audience home whistling many great melodies. Featuring special guest conductor, Dr. Cliff Croomes.

The Austin Symphonic Band (ASB) was founded in 1981 by local brass and woodwind musicians. Only three conductors have led ASB: Frank Simon, Randol Bass, Richard Floyd, and the current Music Director, Kyle Glaser, who has served the band since 2022. Bill Haehnel was appointed Assistant Music Director in 2003.

Named the Official Band of the City of Austin by the Austin City Council in June of 1989, ASB has performed for City events such as the dedication of the Barbara Jordan passenger terminal at Austin Bergstrom International Airport and the Governor’s Welcome Home of the Troops from the Gulf War “Desert Storm” in 1991. ASB also works closely with local schools to provide mentoring, tutoring, performance opportunities, and free tickets to students.

In 1989, ASB was the first community band to perform the Grand Finale Concert at the Midwest International Band and Orchestra Clinic in Chicago. It returned for two additional appearances. ASB was featured at the American Bandmasters Association Conventions in 1993 and 2006. In addition, ASB was offered an invitational performance at the Western International Band Clinic in 2004. The band received the John Phillip Sousa Foundation’s Sudler Scroll for outstanding achievement as a community band in 1994.