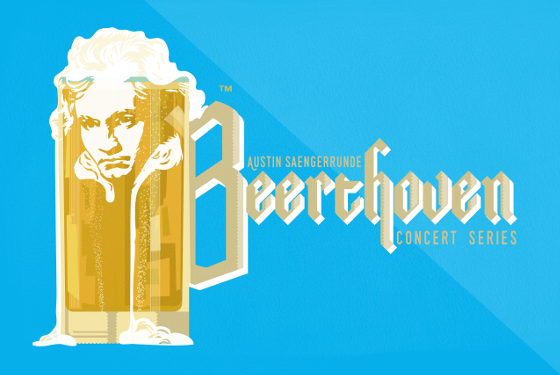 Listen to this broadcast online by clicking the button at the top of this webpage or by tuning your radio to 89.5 FM on Friday, October 27 at 6:00 p.m. This is a broadcast of a previously recorded event.

October makes us think of Fall (though with the weather here, you never quite think that way), Halloween….and Oktoberfest! We thought it would be fitting to celebrate with KMFA’s Dianne Donovan on our October Listen Local, together with our friends at the Beerthoven Concert Series, and feature music from a performance earlier this year which had as its centerpiece a set of new German songs, Texanische Liebeslieder – Texan Love Songs – written by composer David Hanlon. The choral work, which premiered in 2015, has text drawn from stories collected by the German-Texan Dialect Project. Texanische Liebeslieder  tells the tale of Germans moving to Texas and becoming a part of the culture here, with subjects ranging from food to family life, to the German singing clubs around Texas. Austin’s Saengerrunde gets a nod, too, in this delightful composition employing different types of music, among them the march, polka, Texas swing, jazz and more.

"I’ve had life changing moments on either side of the concert stage. But some of my most treasured moments have also been around kitchen tables, campfires, or in the midst of a party. In high school, I wouldn’t go to a party without bringing an instrument. I’ve always thought my love of social music was passed down to me from my Viennese grandmother, a devoted amateur pianist. In tribute to her, I’ll often cajole my pianist dinner guests to the keyboard to play from Grandma Liesel’s four-hands collections.

The first time I played the Brahms Liebeslieder, I felt like I was in the best of both the concert and social musical worlds. I happened to be playing them with world class artists, but the pleasure we took in these pieces made the concert feel like an old fashioned house party where we were making our own entertainment. Ever since, I wanted to write my own Liebeslieder that struck such a balance.

I mentioned this desire to Kathleen Kelly as she was exploring the Texas German Dialect Project at UT-Austin. The Liebeslieder format jumped out as a perfect vessel for Kathy’s inspired arrangement and elaborations of the interviews. We could use the Liebeslieder as a genre that straddles classical and folk traditions, where we could evoke both Brahms and raucous beer-soaked accordion solos. The social pleasure of the music mirrors that of the German immigrants. As they brought their polkas and Beethoven to Texas, their piano salons and singing societies, they built communities out of music as much as out of buildings and farms. I hope that for an evening, whether at a concert or Oktoberfest gathering, these songs will do the same."

"I was inspired to write these texts by the work of the Texas German Dialect Project (TGDP) at the University of Texas at Austin, directed by Dr. Hans Boas. My mother grew up in a German immigrant community in Minnesota, and I have studied and worked in German-speaking countries, my own history drew me to be curious about Texas’ interesting German immigrant history and the TGDP.

The main root of this work is the stunning archive of first person interviews maintained by the TGDP. These interviews with the last surviving native speakers of the Texas Hill Country German dialect reveal rich stories of life before the interstate highway came through, when school and church and daily life still flowed with German cadence and practice. They also illuminate a language mutating and disappearing. I found myself fascinated by a just-varnished world, absolutely Texan and yet so like the bygone German Minnesota described by my grandmother, a life of dances, music, strong families, and hard farm work. And I found myself moved by the loss of this language, as the voices of these elderly people spoke with hesitation these deeply rooted yet long-forgotten words.

The second half of this work is devoted to texts inspired by the archive stories. The first half gives a bit of historical context to these stories. I borrow and adapt texts from 1840s sources to give a sense of the social situations that precipitated the Texas migration. I also took inspiration from mission statements and histories of late 19th century Texan Saengerverein (Singing Societies), which were such an important part of the Texas German culture.

The work is bookended by two verses from a hymn by Hoffmann von Fallersleben, the author of the German national anthem. He was a supporter of the revolution in Germany and an outspoken advocate of immigration. His words provide our work’s hopeful beginning, and elegiac conclusion."