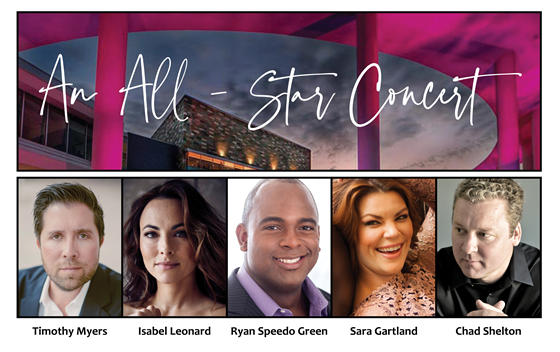 Austin Opera will present four star soloists who will headline An All-Star Concert, featuring the Austin Opera Orchestra and Timothy Myers in his first performance as the company’s Sarah and Ernest Butler Principal Conductor & Artistic Advisor. Making their Austin Opera debuts are mezzo-soprano Isabel Leonard and bass-baritone Ryan Speedo Green, both of whom are mainstays at The Metropolitan Opera and regularly appear at the world’s leading opera houses. And returning to the Long Center stage are soprano Sara Gartland, who starred as Adina in 2014’s The Elixir of Love, and tenor Chad Shelton, who last appeared as Don José in 2017’s Carmen.

Upon the recommendation of medical experts—and out of concern for the health and safety of audience members as well as the artists on stage—the format of the concert has changed to a filmed performance developed especially for at-home viewing.

Highlights from the concert will be edited into a special that will air on Austin PBS in the spring. Supporters Nancy and Neil Schaffel have made a generous underwriting gift to support the filming of the concert for Austin PBS. More information on the Austin PBS broadcast will be announced soon.

Current ticket holders and subscribers to Austin Opera’s 2021 season will receive a link to stream the full All-Star Concert film in mid-February 2021. Members of the general public can gain access to An All Star-Concert and select filmed performances from the company’s archives with the new Austin Opera Premium Winter Pass. For a donation of $100, passholders will receive the complete version of An All-Star Concert; priority access to a waiting list to attend a rehearsal or taping of An All-Star Concert, pending health and safety approvals from local officials; special All-Star Concert gift baskets, which will be available for contactless pickup at the company offices the week of the concert’s streaming premiere; and an invitation to an exclusive watch party with the All-Star Concert artists before the premiere of the Austin PBS special in the spring.

GET A PREMIUM WINTER PASS

Originally founded in May 1986 as Austin Lyric Opera, the city’s first professional opera company, Austin Opera has become a cultural touchstone for the fine arts community in the Central Texas region and has gained national acclaim as a producer of great opera. Co-founders Joseph McClain and the late Dr. Walter Ducloux envisioned a dynamic company that would enrich, entertain, and educate the community. In January 1987, the sold-out inaugural production of Mozart’s “The Magic Flute” debuted to rave reviews. “One could not hope for a more polished first showing,” praised an Austin critic.

Austin Opera is committed to producing and promoting outstanding opera that will entertain, enrich and educate the central Texas community.  Austin Opera is a cultural destination for the community that delivers an extraordinary experience; a creative environment that challenges the misconceptions of the art form; enables lifelong learning, and celebrates the diversity that makes Austin unique.