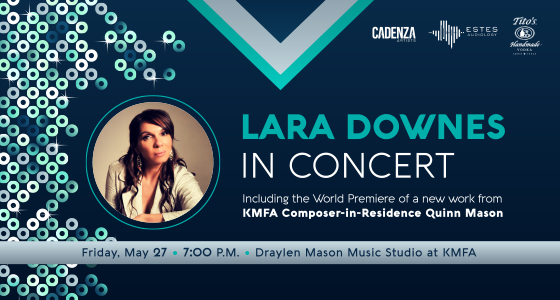 Created for solo piano, Quinn's newly commissioned piece will be premiered on May 27 at 7:00 p.m. by acclaimed concert pianist Lara Downes, in a recital at KMFA featuring music by under-represented composers in the Draylen Mason Music Studio at KMFA.

Lara Downes In Concert Event, May 27

Thank you to our Draylen Mason Composer-in-Residence program sponsors:

On participating in the KMFA Composer-in-Residence Program with Mason, musician Lara Downes said, “I’m thrilled to give the world premiere of this new piece by one of the most brilliant young composers working today! Quinn has a distinct and heartfelt musical voice that speaks profoundly to the future of American music. It’s so exciting that KMFA is harnessing all the power of the radio medium as a driving cultural voice both in the community and on the national arts scene, and I’m so happy to be part of this visionary project to honor Draylen Mason’s legacy in such a meaningful way!”

Mason spent a week in residence with KMFA in late February, where supporters got to hear some of his music, as well as some improvisation at the piano by the composer himself. While in Austin, Mason also spoke with students at the conservatory of Draylen Mason’s alma mater, East Austin Prep, and conducted a virtual mater class with aspiring composers from Golden Hornet’s Young Composer project. Music students from KMFA’s neighbor Martin Middle School also performed for Quinn the Draylen Mason Music Studio.

The two additional commissioned works, one for symphonic winds and one for choir, will premiere in the fall. All three works will be recorded and made available to classical radio stations around the country for incorporation into their playlists following the world premieres.

More details on additional compositions and upcoming performances will be announced at a later date.

The Draylen Mason Composer-in-Residence program honors the memory of Draylen Mason, a promising young Austin musician killed in 2018 by the Austin package bomber.

With classical music historically dominated by white (mostly male) composers, performers, and managers, works of composers of color and other minorities have been overlooked and underrepresented, not only on concert stages, but also on record labels and on classical radio stations, which rely on recorded music for their daily playlists. The Draylen Mason Composer-in-Residence program was inspired by the national call for greater diversity in classical music.

Twice commissioned by the Dallas Symphony Orchestra, Quinn Mason is a prolific, Dallas-based young composer whose work is being acclaimed and performed around the country.  Texas Monthly Magazine declares he “might be classical music’s next superstar,” while Dallas Morning News critic Scott Cantrell calls him “a most impressive talent.” Still in his 20s, he has assembled an astonishing output of music in multiple genres. His orchestral music has received performances in the US by the Dallas Symphony Orchestra, San Francisco Symphony and Utah Symphony Orchestra, among many others. His chamber works and music for wind ensembles have been extensively performed.

A multiple prize winner in composition, he has received awards from the American Composers Forum, the American Society of Composers and Publishers (ASCAP), Texas A&M University, and Voices of Change, among others. In 2020, The Dallas Morning News named him a finalist for “Texan of the Year.”

Pianist Lara Downes is an iconoclast and trailblazer whose dynamic work as a sought-after performer, a Billboard Chart-topping recording artist, media personality, producer, curator, and arts advocate positions her as a cultural visionary on the national arts scene.

Ms. Downes’ creative roadmap seeks inspiration from the legacies of history, family, and collective memory, excavating the broad landscape of American music to create a series of acclaimed performance and recording projects that serve as gathering spaces for her listeners to find common ground and shared experience.

Lara’s summer 2021 projects include appearances and residencies with the Ravinia, Oregon Bach, Newport, and Brevard festivals, and the release of her upcoming album New Day Begun, a musical celebration of heritage, a cry for freedom, a call to action, and a promise to the next generation

Ms. Downes is the creator and curator of the Rising Sun Music series, producer and host of the NPR Music show AMPLIFY with Lara Downes, and Resident Artist for the KDFC/KUSC radio network. She is the inaugural Artist Citizen in Residence for the Manhattan School of Music. Her work has been supported by the Mellon Foundation, National Endowment for the Arts, Sphinx Organization, and Classical Recording Foundation Award, among others. She is an Artist Ambassador for Headcount, a non-partisan organization that uses the power of music to register voters and promote participation in democracy.