IN PARTNERSHIP WITH THE AUSTIN JEWISH FILM FESTIVAL

WE LEFT THE CAMP SINGING 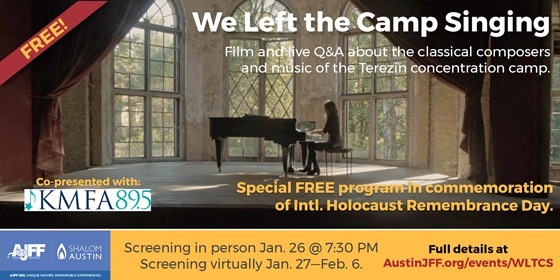 An educational documentary involving music and exclusive interviews with Holocaust survivors, the project has the goal to share memories of musical activities in the Theresienstadt ghetto-camp, a unique camp located in Czechoslovakia, where the presence of talented artists, musicians, and composers encouraged cultural life to flourish despite the desperate living conditions of the inmates. The documentary follows Sofia’s intense journey studying the music of composers who were imprisoned in Theresienstadt such as Pavel Haas, Gideon Klein, and the more recently re-discovered Hans Winterberg, while she is also committed to meet some of the last survivors. The interviews reveal an inspirational story of intergenerational meeting that keep the memory of the Holocaust alive.

Note for the In-Person event: Although this is a free program, tickets are required and should be pre-purchased on this page. Screening will be preceded by the 8 minute short “The Record” and followed by a live-over-Zoom Q&A with director/producer Sofia Tapinassi.

The Austin Jewish Film Festival (AJFF) presents the best Jewish films from the U.S. and around the world to entertain and educate the Greater Austin community and provides complementary programs to enhance the cinematic experience. In 2002, after attending the Jewish Cinema South, a project presented by the Goldring/Woldenberg Institute of Southern Jewish Life, Dr. David Goldblatt initiated the Austin Jewish Film Festival (AJFF) as part of Congregation Agudas Achim’s AgudasARTS program. The first AJFF presented five films at the Alamo Drafthouse in October of that year, opening with “Shalom Y’all,” a movie about Southern Jews. Cindy Pinto joined the festival the following year as co-chair.