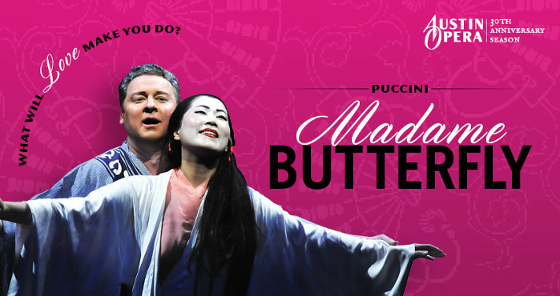 Listen to this live broadcast online by clicking the button at the top of this webpage or by tuning your radio to 89.5 FM on Sunday, May 7 at 2:50 pm.

KMFA is proud to bring you a live broadcast of Giacomo Puccini's masterpiece Madame Butterfly, concluding Austin Opera's 30th Season. One of the most beloved operas of all time, Butterfly is the heartbreaking tale of the loving geisha Cio-Cio-San, sung by Yunah Lee in her Austin Opera debut. She is deserted by her callous and deceptive husband, the American naval officer Pinkerton, sung by Dominick Chenes. This is Garnett Bruce's 10th production of Madame Butterfly. Michael Chioldi is Sharpless and Mika Shigematsu, also making her Austin Opera debut, is Suzuki. Richard Buckley conducts the Austin Opera Orchestra and Austin Opera Chorus. Julian Reed is chorus master.

KMFA's Sara Schneider and Dianne Donovan are your hosts for this live broadcast from The Long Center in Austin.

Puccini believed in Cio-Cio-San from the beginning. While he was in London rehearsing TOSCA, he saw the play MADAME BUTTERFLY by David Belasco. Not understanding a word of English, he found the woman’s long vigil from sunset to sunrise the most moving part of the play and immediately wanted to set it to music.

He would give his heroine a very Italian willfulness ornamented with Japanese musical themes. However, the 1904 premiere at La Scala ended poorly, and he would spend the next three years revising the story and refining these characters and their music. What may have been stereotypes in Belasco’s play become wonderful individuals in Puccini’s hands.

This opera, for me, surpasses all his others in nuance, dramatic tension and soaring melody. Puccini himself was starting to feel an outsider as the musical world around him was changing from romance to austerity, modernism, atonality and edginess. As a creator of melody and harmony, he adopted and adapted Japanese themes for authenticity, but could not chase away his own romantic musical instincts. But his score is still revolutionary, best experienced in the tense silence of the final scene. The artists onstage along with the audience are bound together to see, hear and understand Cio-Cio-San’s ultimate choice in real time.

Puccini delivers the fatal conclusion Belasco could not. The play (as well as John Luther Long’s novella) merely mentions that when the Pinkertons return to the little house on Haigashi Hill, “they find it quite empty.” Puccini delivers the condemnation of Lt. Pinkerton with a full orchestra pounding the cultural theme of Japanese tradition and sets the stage for suffering amidst the clash of Japanese and American cultures. Puccini never doubted the strength of “his Butterfly” and neither should we.

ACT I
Japan, early 20th century. Lieutenant B.F. Pinkerton of the U.S. Navy inspects a house overlooking Nagasaki Harbor that he is leasing from Goro, a marriage broker, who has also arranged his union with Cio-Cio-San, known as Madame Butterfly. The American consul, Sharpless, arrives for the wedding ceremony and Pinkerton describes to him his philosophy of the fearless Yankee roaming the world in search of experience and pleasure. Sharpless warns him that the girl may view the marriage more seriously. After the formal introduction, Cio-Cio-San explains that her family was once prominent but lost its position, and she has had to earn her living as a geisha. The Imperial Commissioner reads the marriage agreement, and the relatives congratulate the couple. Butterfly’s uncle, the Bonze (a priest) interrupts the festivities. He curses the girl for rejecting her ancestral religion, and the shocked relatives denounce Cio-Cio-San as they swiftly leave the house. Pinkerton tries to console his “Butterfly” as they are left alone on their wedding night.

ACT II
Three years have passed, and Cio-Cio-San awaits her husband’s return. Suzuki prays for help but is berated for believing in Japanese gods rather than in Pinkerton’s promise to return “when the robins nest again.” Sharpless appears with a letter from Pinkerton, but before he can read it, Goro arrives with the latest potential husband, Prince Yamadori. Butterfly politely insists she is not available for marriage—her American husband has not deserted her. Sharpless attempts to read Pinkerton’s letter but is repeatedly interrupted. Giving up, he asks her what she would do if Pinkerton never returned. Cio-Cio-San replies she would either become a geisha again, or better, die. After Cio-Cio-San introduces her son, Trouble, Sharpless leaves, promising to tell Pinkerton of the child. A cannon shot is heard in the harbor announcing the arrival of Pinkerton’s ship, the “Abraham Lincoln.” Overjoyed, Cio-Cio-San joins Suzuki in strewing the house with flowers. As night falls, they keep vigil, waiting through the night for Pinkerton.

ACT III
At dawn, Suzuki insists that Cio-Cio-San get some sleep. Sharpless appears with Pinkerton and Kate, Pinkerton’s new wife. Suzuki realizes who the American woman is and agrees to help break the news. Pinkerton is overcome with guilt and runs from the scene. Cio-Cio-San rushes in hoping to find Pinkerton, but sees Kate instead. After a moment, she grasps the situation. She agrees to give up the child but insists Pinkerton return for him. Once she dismisses everyone, she takes out the dagger with which her father committed suicide, reading the inscription, “It is better to die with honor than live without it.”