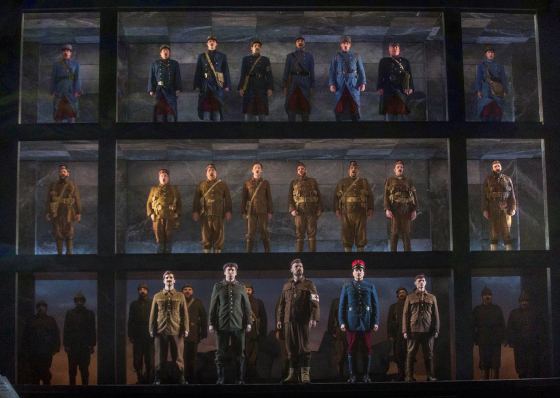 Listen to this LIVE broadcast online by clicking the button at the top of this webpage or by tuning your radio to 89.5 FM on Sunday, February 3 at 2:20 p.m.

KMFA is thrilled to broadcast live from Austin’s Long Center for the Performing Arts as Austin Opera continues its 2018-2019 season. Much has been said about the opera Silent Night, the result of a brilliant collaboration with composer Kevin Puts and librettist Mark Campbell of Manchurian Candidate fame. Inspired by the 2005 French film Joyeux Noël, Silent Night presents a dramatized account of the true story of German, French, and Scottish World War I soldiers who, on Christmas Eve of 1914, made an impromptu truce to put down their weapons for one night, share some food and drink, share their stories, and ultimately to reconnect with their humanity. In 2012, Kevin Puts won the Pulitzer Prize for Music with this work; it’s easy to hear why. Puts is known for his narrative style and lush orchestrations, and in this venture he sprinkles in Mozartian moments (the two leads are opera singers in the story as well) and wistful folk melodies to great effect. Campbell’s eloquent libretto has much to do with the opera’s success, using five different languages along the way. The cast is led by Hailey Clark and Joseph Dennis; the Austin Opera orchestra and chorus are led by Maestro Timothy Myers. KMFA's Dianne Donovan and Jeffrey Blair are your hosts.