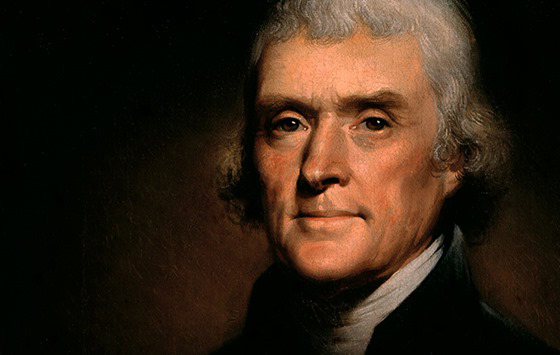 KMFA 89.5 presents a live broadcast of La Follia Austin Baroque "American Roots" on June 28 at 3 p.m. Commemorating July 4, La Follia will re-create a concert where Thomas Jefferson himself would have performed on violin, at his mansion in Monticello.

Listen to the live broadcast online by clicking the "Listen Live" button at the top of this webpage or by tuning your radio to 89.5 FM this Sunday.

In addition to being a Revolutionary, a statesman, a scholar fluent in a half dozen languages, and a President, Thomas Jefferson was a skilled violinist. At his famed mansion in Monticello (which he designed), he would host concerts featuring himself and his family and musical friends, with esteemed guests like his good friend Lafayette, and even "captured" British officers.

La Follia will perform works from Jefferson's musical library, meticulously catalogued by Jefferson himself, with many pieces annotated in Jefferson's hand. Jefferson's taste in these concerts ranged from French and Italian classical music, to English works, to American art songs, folk songs, and folk dances.

This broadcast is part of our Listen Local series. This project is supported in part by the Cultural Arts Division of the City of Austin Economic Development Department, the Still Water Foundation, Estes Audiology Hearing Centers, and Tito's Handmade Vodka.