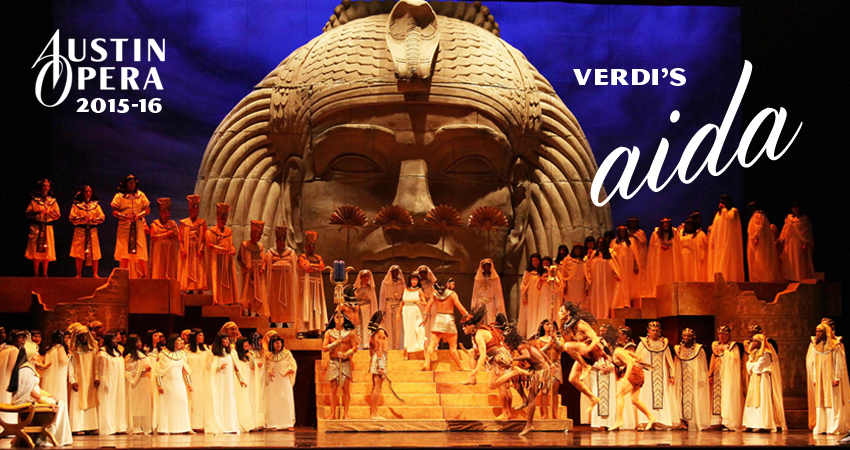 KMFA 89.5 presents a live broadcast of Austin Opera's presentation of Verdi's Aida. Dianne Donovan and Chris Johnson will host from the Long Center with commentary starting at 2:50 p.m.

This broadcast is only available on 89.5 FM and will not available on our online stream. We apologize for any inconvenience.

Listen to this special broadcast by tuning your radio to 89.5 FM on Sunday, November 15.

Austin Opera launches its 2015-16 season with the masterful grand opera of Verdi’s Aida, foundational support provided by the Georgia B. Lucas Foundation.

Famous for its Triumphal March and soaring arias, Verdi’s Aida is an intimate story of a love triangle between enemies during the times of war between Egypt and Ethiopia. Graced with some of Verdi’s greatest music, it’s a tour de force of choral scenes, dance, massive sets, and vocal power. Issachah Savage and Karen Slack will make their Austin Opera debuts in this beloved story of ill-fated love and betrayal.

This broadcast is part of our Listen Local series. This project is supported in part by the Cultural Arts Division of the City of Austin Economic Development Department, the Still Water Foundation, Estes Audiology Hearing Centers, and Tito's Handmade Vodka.