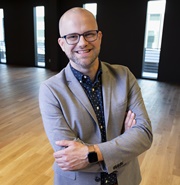 Ryan Kelly is the Assistant Director of Bands and an Assistant Professor of Practice in Conducting at The University of Texas at Austin. His responsibilities include conducting the New Music Ensemble and Symphony Band, teaching undergraduate and graduate conducting, and serving as Director of Longhorn Music Camp, overseeing the university’s summer music program hosting over 1,100 students annually from across the United States. Dr. Kelly previously served the Butler School of Music as Interim Director of Orchestras and as Associate Director of the Longhorn Band. Prior to joining the UT faculty, he was Associate Director of Bands and Director of Athletic Bands at the University of Central Florida, where he served as Director of the Marching Knights, conducted the Symphonic Band, and taught courses in music education.

Dr. Kelly maintains an active schedule as a guest conductor, clinician, adjudicator, and arranger. He conducts regional and All-State honor bands throughout the United States, and in the summer teaches on the faculty of the World Youth Wind Orchestra Project/World Adult Wind Orchestra Project as part of the Mid-Europe Festival in Schladming, Austria. Dr. Kelly is an enthusiastic advocate for new music, and has collaborated with Pulitzer Prize-winning composer Kevin Puts and GRAMMY-nominated composer Adam Schoenberg to transcribe, premiere, and publish their music for wind ensemble. A Northern Virginia native, he holds bachelor’s and master’s degrees in music education from Florida State University, and the Doctor of Musical Arts degree in conducting from The University of Texas at Austin.