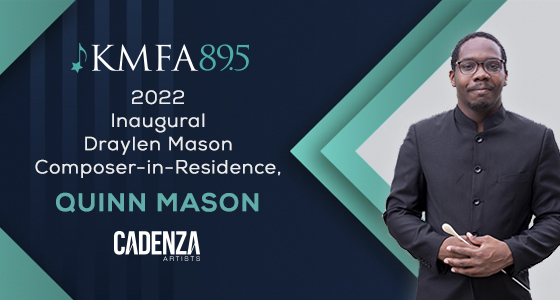 KMFA Classical 89.5 announces launch of the Draylen Mason Composer-in-Residence program with the Dallas-based, rising composer Quinn Mason named as the inaugural commissioned composer. Mason will spend the week of February 21-25 in residence with KMFA in Austin, Texas.

With classical music historically dominated by white (mostly male) composers, performers, and managers, works of composers of color and other minorities have been overlooked and underrepresented, not only on concert stages, but also on record labels and on classical radio stations, which rely on recorded music for their daily playlists. The Draylen Mason Composer-in-Residence program was inspired by the national call for greater diversity in classical music.

“KMFA strives to bring our listeners a diverse range of music, including works by the underrepresented, including women and composers of color,” explains KMFA Director of Broadcasting & Content Anthony McSpadden, who conceived the program. “Now that we have a world-class performance space and state-of-the-art recording capabilities, we’re excited to turn our attention to the creation of new music from composers of color, like Quinn, and we’ll share the fruits of these efforts with other classical broadcasters around the country in hopes that they will be able to add to the existing works already in their libraries.”

Following a week of creative exploration, Mason will compose three new works consisting of one for piano, one for ensemble, and one for choir. Each piece will be recorded at different times by select performers in KMFA’s acoustically stunning Draylen Mason Music Studio, built for just this sort of music discovery.

Performances of Mason’s new commissioned works will be premiered over several months with three live concerts beginning this May. These performances will be recorded and distributed to classical radio stations around the country for incorporation into their playlists following the world premieres.

"I'm extremely honored to serve as KMFA's inaugural Draylen Mason Composer in Residence,” said composer Quinn Mason. “It is in this position that I hope I can bring my personal musical voice to a wider audience with music that has meaning to me and will hopefully have meaning to a variety of listeners. I'm especially looking forward to creating new compositions just for this residency, in collaboration with world class artists."

More details on the compositions and upcoming performances will be announced at a later date.

The Draylen Mason Composer-in-Residence program honors the memory of Draylen Mason, a promising young Austin musician killed in 2018 by the Austin package bomber.

Twice commissioned by the Dallas Symphony Orchestra, Quinn Mason is a prolific, Dallas-based young composer whose work is being acclaimed and performed around the country.  Texas Monthly Magazine declares he “might be classical music’s next superstar,” while Dallas Morning News critic Scott Cantrell calls him “a most impressive talent.” Still in his 20s, he has assembled an astonishing output of music in multiple genres. His orchestral music has received performances in the US by the Dallas Symphony Orchestra, San Francisco Symphony and Utah Symphony Orchestra, among many others. His chamber works and music for wind ensembles have been extensively performed.

A multiple prize winner in composition, he has received awards from the American Composers Forum, the American Society of Composers and Publishers (ASCAP), Texas A&M University, and Voices of Change, among others. In 2020, The Dallas Morning News named him a finalist for “Texan of the Year.”

Live May 14, 2021 Scottsdale Center For The Performing Arts

Program note: Svítání is a Czech word, which means 'Sunrise' or 'Dawn'. The meaning behind this composition itself is rebirth and renewal, which can relate to the title as the birth of a new day or time. The piece itself was born out of time of great struggle and uncertainty for everyone, which is reflected in the first movement as a calm yet tension filled meditation. The second movement is in a similarly meditative feel, but triumphs this time, ending quietly in introspection like the breaking of dawn on a still and tranquil morning. With this piece being written about such a tumultuous time, the overall message is that we are leaving an old chapter and beginning a new, fresh one, one that will hopefully lead us to better days ahead.

This piece is dedicated with sincere gratitude to Warren Cohen and the MusicaNova Orchestra, who Mason wrote this composition for.