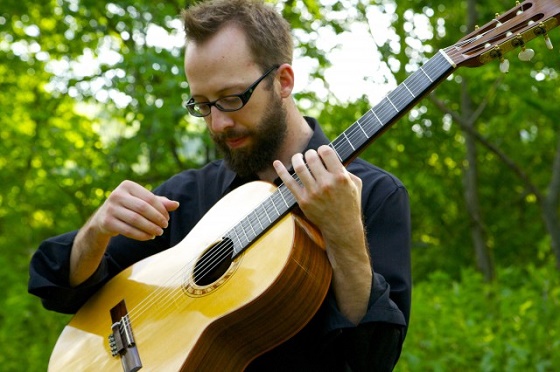 Joseph Williams is an Austin-based guitarist who is also a prolific composer and an educator. He is a member of the Texas Guitar Quartet. He’s also the composer in residence for Austin Classical Guitar. One of his latest pieces appears on the most recent album by the internationally-known Cavatina Duo called Sephardic Journey.

He stopped by KMFA to talk with Chris Johnson about his latest piece which he says bears witness to the tragic history of Isabel de los Olives y López, a Sephardic woman who lived during the Spanish Inquisition.

You can hear another new piece by Williams tomorrow night (Saturday) as Austin Classical Guitar presents the world-premiere performance of Persona. It’s the centerpiece of the first concert of ACG’s literature-inspired summer series, Narratives.

Bonus Material! While at the studio, Joe convinced Chris Johnson to give a little demonstration about the power and versatility of the guitar. Chris performs a simple piece written by Joe Williams for his young nieces.