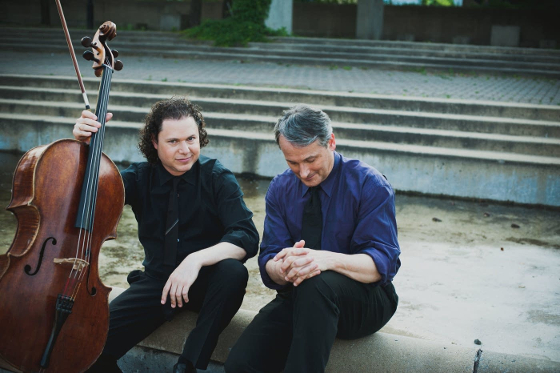 When cellist Matt Haimovitz first started collaborating with pianist (and radio host) Christopher O’Riley, he discovered a kindred spirit. Once a child virtuoso who made major label recordings of concertos, Haimovitz had been touring around the country taking the music of Bach into bars and coffee houses. His Bach in Bars tour made such an impression that it launched a whole movement of classical musicians performing in bars and night clubs that still continues to grow. O’Riley, who had grown tired of playing Chopin during the breaks of his nationally distributed radio show, From the Top, had been transcribing songs by the late singer/songwriter Elliot Smith and the band Radiohead, and had released a couple of albums of songs by those artists.

Their first project Shuffle. Play. Listen. featured what would become a signature mix of music with tracks by composers like Igor Stravinsky and Leoš Janáček mixed with transcriptions of songs by artists like Aphex Twin, Cocteau Twins, and John McGlaughlin.

Their latest album Troika continues that eclectic tradition. It explores three generations of Russian composers who worked in either exile or protest, or both. Sonatas by Prokofiev, Shostakovich, and Rachmaninoff are mixed with song transcriptions by Viktor Tsoi, John Lennon, and Pussy Riot. O'Riley and Haimovitz recently spoke about the new album with Chris Johnson on Rideshare.