My Fair Voltaire: Frederick the Great Meets His Match 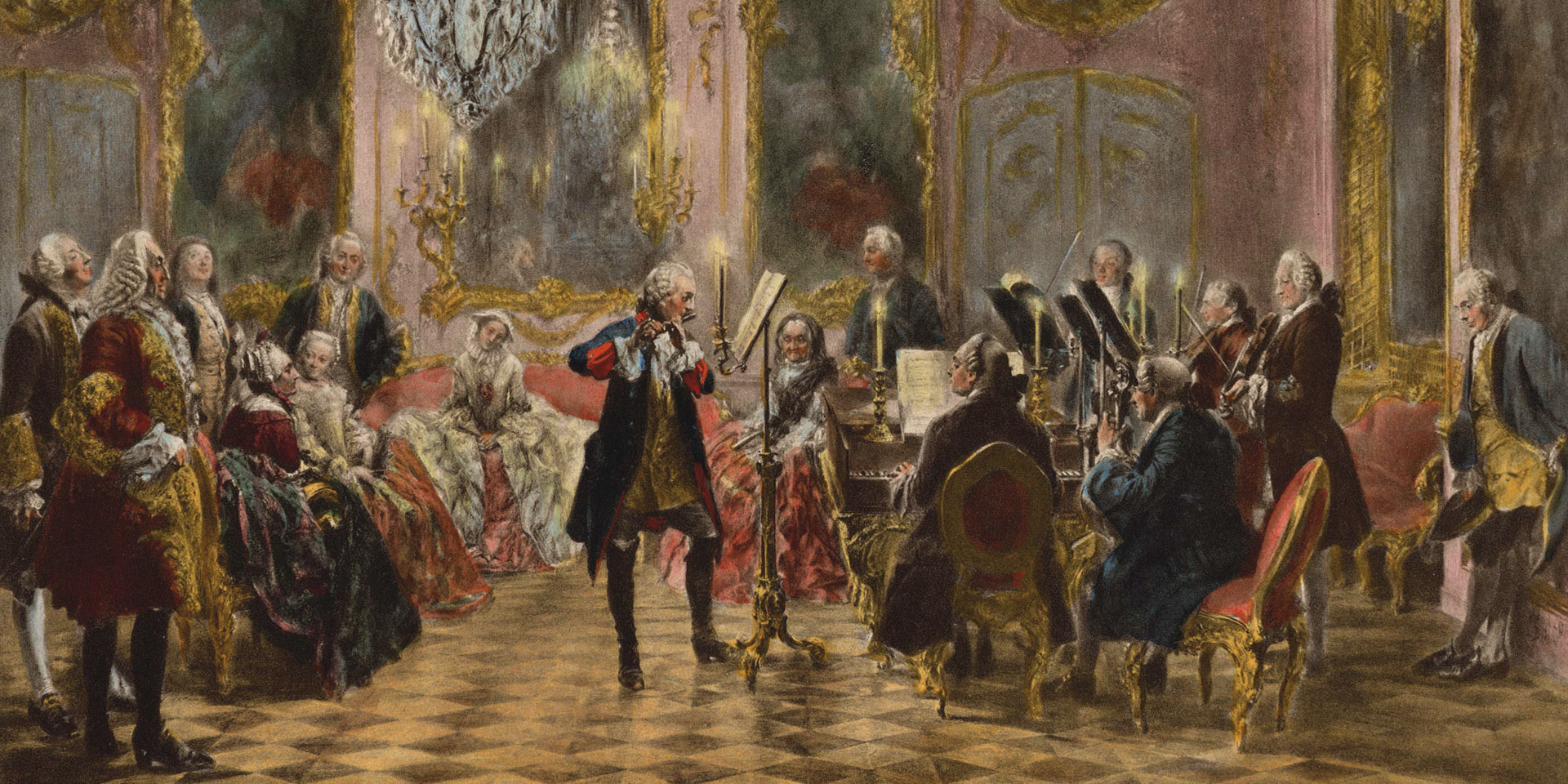 This week, Austin Baroque Orchestra touches on the friendship of Voltaire and Frederick the Great with their performance "When Freddie Met Frankie." The performance will be segmented by readings of the famous letters shared between Frederick and Voltaire.

Back in my university days, I had a pretty biased idea of how members of royalty used to co-exist with artists – they were merely the money. Sponsors of the finest composers, scientists, and writers of their era, but painfully oblivious to the genius developing around them. Whether it was Charles VII or Henry VIII, all I could ever picture was Jeffrey Jones in Amadeus (1984).

But my exaggerations are easily disproven! You only have to look as far as Frederick the Great of Prussia to see a king that’s in direct contradiction to this stereotype. Frederick befriended, employed, and even worked alongside many important figures of the Enlightenment. But among all the famous artists that Frederick connected with during his reign, there was one individual that he yearned for the most, and who was ultimately his greatest disappointment: the French writer and philosopher, François-Marie Arouet, a.k.a. Voltaire. 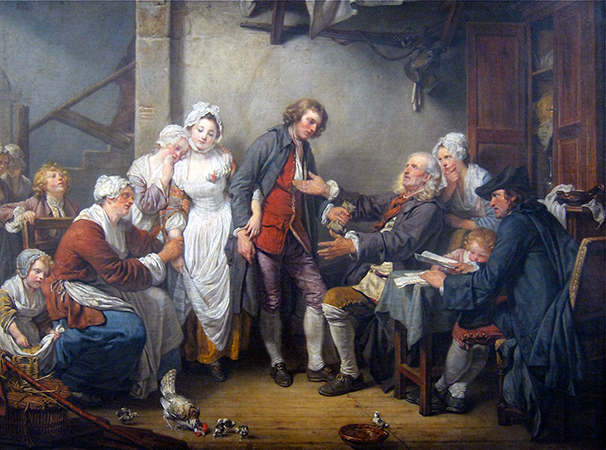 Frederick’s friendship with Voltaire was born out of a shared love for arts and culture. As a young prince, Frederick was swept away by the brilliant ideas that were spreading throughout Europe during the Age of Reason. Little Frederick started his own library with the help of his tutor Jacques Duhan, took flute lessons from Johann Joachim Quantz (and became fairly accomplished), and loved to wear gorgeous French-style robes. This was all done in secret though, as these were hobbies that enraged Frederick’s father, King Frederick William I, who didn't approve of his artistic pursuits. 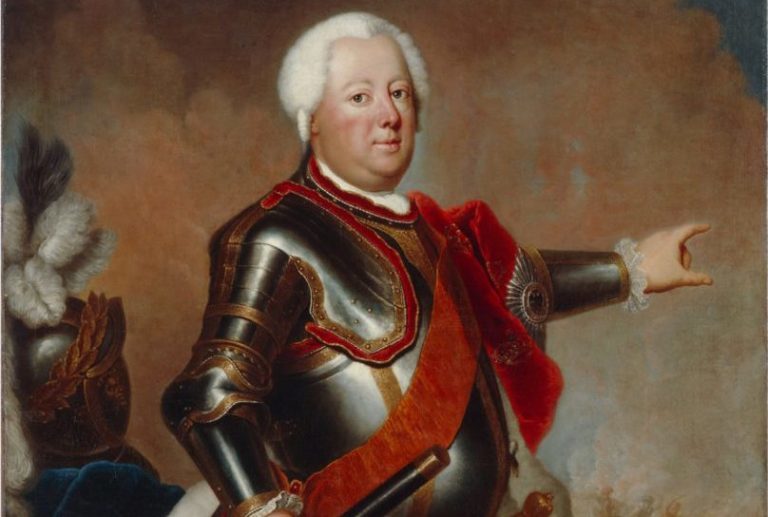 Not so fun fact: One of Frederick William’s first acts as king was to fire all the musicians of the court.
Pesne, Antoine. Portrait of Frederick William I of Prussia, 1733. History Answers. https://www.historyanswers.co.uk/. Accessed January 11, 2018

For Frederick, music was more than just a distraction or source of entertainment, it was the great communicator of emotions and the soul. After arriving in Neuruppin, Frederick quickly began assembling a super-group of instrumentalists. He got ahold of Carl Heinrich Graun, Michael Fredersdorff, brothers Franz and Johann Benda, and many others. All in all, Frederick’s Neuruppin getaway would be outfitted with 17 musicians, and he added many more when he was later crowned king.

It was during this harmonious period in his life that Frederick began his correspondence with Voltaire. Believing that he knew Voltaire intimately by being a longtime fan of his, Frederick thought that he would appreciate French translations of the works of Christian Wolff.

Voltaire was surprised to get a letter from the crown prince of Prussia, whom he’d never met. More surprising was that the letter was dripping with compliments, as Frederick passionately wrote, "Your works are treasures of the mind…You alone are able to combine the wisdom of a philosopher, the talents of an historian and the brilliant imagination of a poet in the same person." 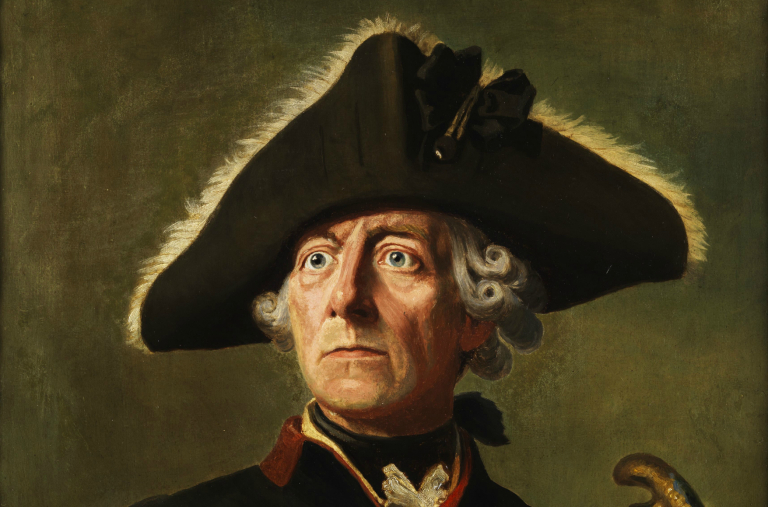 By the end of his life, Frederick the Great composed 121 flute sonatas, four symphonies, and wrote the libretto for Graun’s opera, Montezuma, just to name a few musical accomplishments.
Camphausen, Wilhelm. Portrait of Frederick the Great, 1869. “Frederick the Great.” Wikipedia. https://en.wikipedia.org. Accessed January 11, 2018.

Voltaire responded to the flattering two-fold, writing to Frederick that he was "a prince who thinks like a man, a royal philosopher who will make men happy…[Your] divine character….will be adorned by your people and cherished by the entire world." The letter also calls Frederick "a Caesar," "a Virgil," "an Apollo," "a Socrates." The list goes on for a really long time.

One reason Voltaire was so complimentary was that he thought Frederick might be useful down the line. Voltaire was often in hot water with the aristocracy, his works were starting to lose popularity in France, and he was constantly in danger of persecution. It seemed like a good idea to be in the favor of a foreign sovereign, in case he needed a place to lay low. Regardless, the two hit it off and continued writing to each other for years. They would later have their first meeting during Frederick’s inaugural year as king. 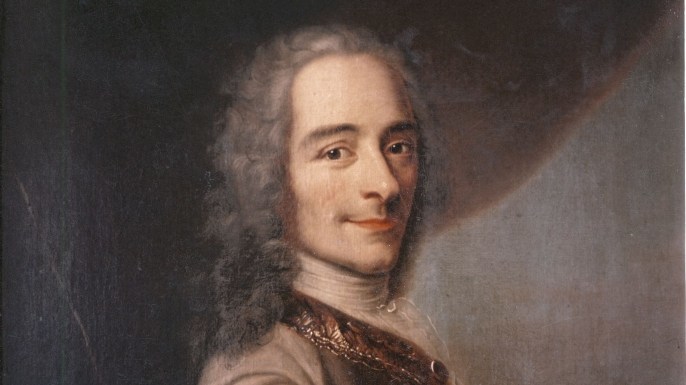 Voltaire’s first visits to Frederick in 1740 and 1742 were as a spy for the French. What the French didn’t know was how awful Voltaire was at espionage. Frederick saw through the Voltaire’s intentions both times, but didn’t hold it against him.
Quentin de La Tour, Maurice. Portrait of Voltaire, 1736. “10 Things You Should Know About Voltaire.” History. http://www.history.com. Accessed January 11, 2018.

After the death of Frederick William in 1740, the 28-year-old King Frederick II was able to fully embrace his love for the finer things in life. He immediately sent his Kapellmeister, Carl Heinrich Graun, to Italy so he could gather opera singers. Meanwhile, he had his architect, Georg Knobelsdorff, construct a new opera house in Berlin. For the next 15 years Frederick dedicated himself to nearly all the aspects of running his opera, including the preparation of singers, librettos, rehearsals, and even costumes.

Besides musicians, Frederick also invited the finest-minded individuals of Europe to come live with him in Potsdam as members of his court. His collection of celebrities included people like philosopher Christian Wolff, Swiss mathematician Leonhard Euler, and eventually Voltaire, who finally moved in with Frederick in 1750 after years of pleading from the king. 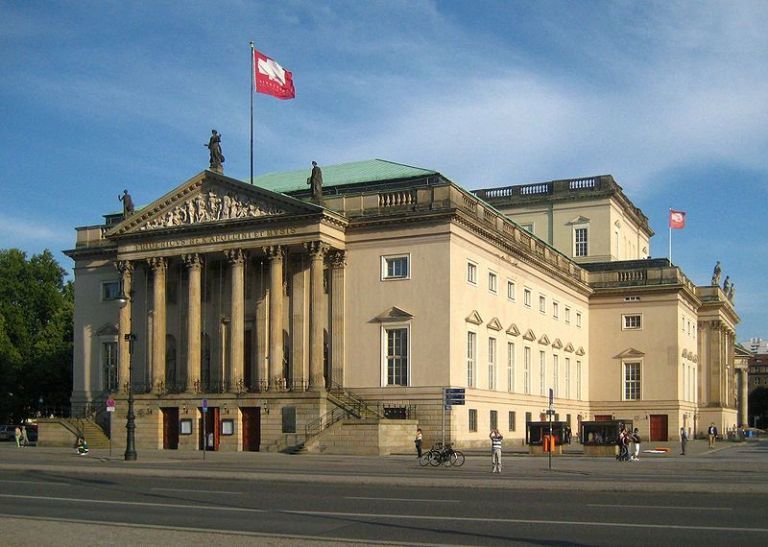 For a time, Voltaire and Frederick’s relationship in Potsdam was mutually beneficial. Through Frederick’s public admiration, Voltaire was given a status few other philosophers of the era had. Likewise, Voltaire helped spread the word of Frederick’s flattering image as a philosopher-king.

Unfortunately, Potsdam just wasn’t big enough for the two of them. While Voltaire enjoyed the praise and luxuries that came with being a member of the king’s court, at the end of the day his job was mostly just to proofread and even rewrite Frederick’s awful attempts at French poetry. That and have dinner with him. This mundane way of life suited Voltaire for awhile since it gave him a lot of time to work on his own writings, but eventually it was just too limiting for him. In speaking candidly about his proofreading position, Voltaire said "Will he never get tired of sending me his dirty linen to wash?" 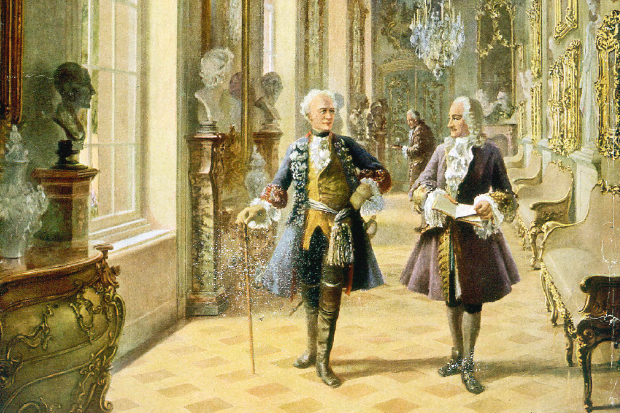 In private, Frederick would say that Voltaire was as “mischievous as a monkey.”
Schobel, Georg. Frederick strolls with Voltaire through the palace of Sanssouci, 1900. “Atheist and gay, Frederick the Great was more radical than most leaders today.” The Spectator. https://www.spectator.co.uk/. Accessed January 11, 2018.

Fredrick wasn’t too happy with his new roommate either. In one instance, Voltaire got involved in a international scam involving Saxon war bonds, publicly embarrassing Frederick. Another time, Voltaire put himself at the center of an infamous intellectual feud between professor Johann Samuel Koenig and Pierre Louis Moreau de Maupertuis. Long story short, it involved proving the existence of god with an algebraic formula, and it ended with a lot of open letters being written between the three of them about how stupid the others were. Frederick gathered all the copies of Voltaire’s dissenting comments and publicly burned them.

When all was said and done, Frederick and Voltaire were glad to be rid of one another. In 1753, shortly before Voltaire was finally allowed to leave Prussia (he had to ask Frederick repeatedly), he wrote of the king that "I was enthusiastic about him for sixteen years, but he has cured me of this illness." 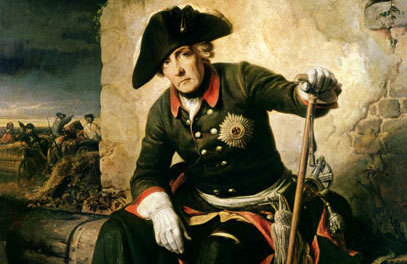 Though he was a musician, writer, and lover of the arts, Frederick the Great’s biggest impact on history was that of a conqueror who used his army as his principle tool of foreign relations.
Schrader, Julius. Frederick the Great after the Battle of Kolin, 1900. Wikipedia. https://en.wikipedia.org. Accessed January 11, 2018.

On his way home in June 1753, Voltaire was apprehended in Frankfurt by Prussian authorities on order from Frederick. Apparently, he had illegally taken a private edition of Frederick’s poetry, though Voltaire claimed it was a gift. He was placed under house arrest for a month while Frederick’s goons seized all of his money and jewels. Also, as this was all taking place in the Free Imperial City of Frankfurt, not Prussia, this whole debacle was super illegal.

Voltaire and Frederick would never again see one another, but only a year after the Frankfurt incident, they started writing each other again! They continued to do so for the rest of their lives. Frederick didn’t appreciate Voltaire’s personality, but loved the words he put on paper. Voltaire didn’t care for Frederick as a monarch, but loved the music-loving, philosophy nerd underneath. Both of them learned to accept the half of each other they didn’t like – just as long as they didn’t live in the same country. In an Age of Reason, their friendship stood as a messy, passionate contradiction. 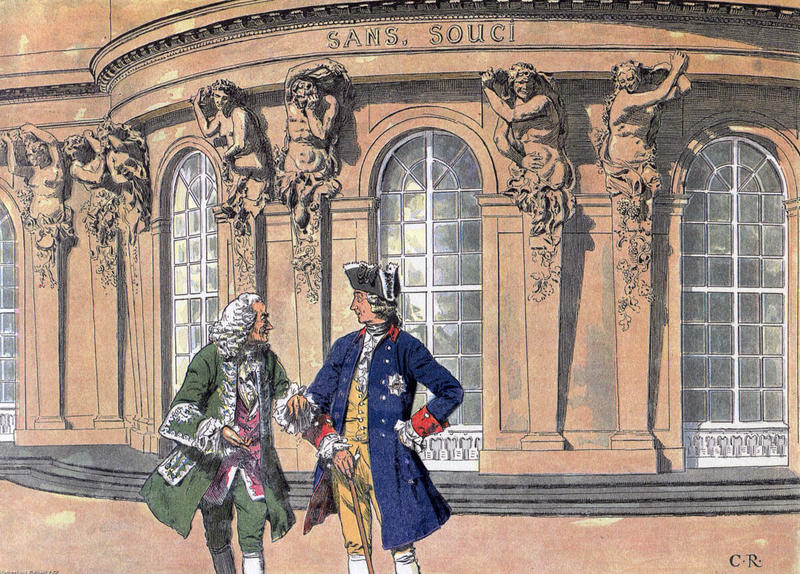 “I will lay may heart at your feet, and you will decide if it is possible for me to pass my life at your side. You will be the arbiter of my destiny…Do not forget me, my adorable sovereign.”
Röchling, Carl. King Frederick and Voltaire in Sanssouci, 1895. “Battle of Chotusitz.” British Battles. https://www.britishbattles.com/. Accessed January 12, 2018.