A Genre Herself: Yoko Kanno 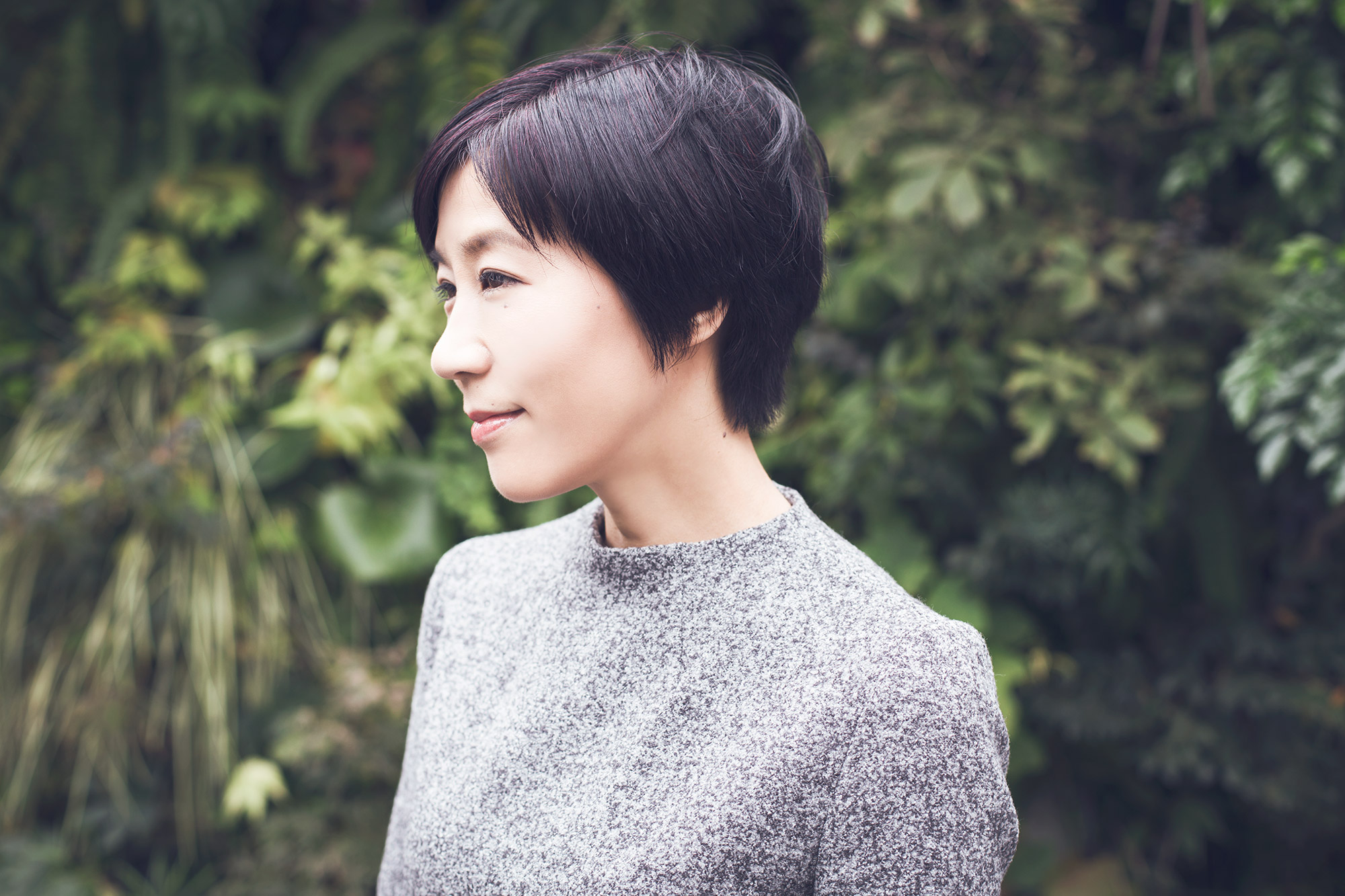 There is only one composer in the world who can utilize blues harmonicas, church organs, nonsense languages, and orchestral strings—and have it actually make sense.

The TV series Cowboy Bebop has long been known as a magnum opus of the anime genre, but equally monumental is its score composed by Yoko Kanno. Like the era of music it’s named for, Cowboy Bebop threw out the playbook on how jazz (or in this case anime) was made, basing many aspects of the show around a laid-back and improvisational ethos. Similarly, Yoko Kanno’s music moves freely between genres and inspirations with beautifully-cool ease.

Stealing a line from the show’s grandiose self-description, Kanno’s soundtrack for Cowboy Bebop was, and remains, “a new genre itself.”

Cowboy Bebop first aired on Japanese television in 1998 and developed a cult following in the United States when it aired on Cartoon Network in 2001. The show follows a group of bounty hunters aboard the Bebop, a run-down space vessel sailing the stars in the late 21st century. The crew includes the mysterious Spike Spiegel, ex-cop Jet Black, the opportunistic Faye Valentine, hacker Radical Edward, and the data dog Ein. Together they travel across the galaxy engaging in bounty-hunting hijinks while going through some serious soul-searching along the way.

As the 26-episode odyssey progresses, Kanno’s score plays to the show’s most whimsical, tragic, and ethereal moments. And although the show often centralizes its music around jazz idioms, the soundtrack to Cowboy Bebop touches on genres as diverse as world music, blues, heavy metal, gospel, and classical.

Cowboy Bebop’s soundtrack was recorded with Kanno’s band The Seatbelts, which was comprised of Japanese, French, and American musicians.

Born in 1963 in Sendai, Japan, Kanno began studying music at a young age, winning her first composition competitions before she was even a teenager. Her early success was the product of a strict upbringing; growing up, Kanno’s parents cut her off from television, movies, manga, and just about any medium that wasn’t classical music.

When Kanno grew up and enrolled at Waseda University, she rebelled against her parents by dropping her pursuits in music and instead studied literature. Despite this, Kanno’s senior classmates continually asked her for help with composition projects and musical transcription. Kanno again found herself surrounded by music, but for the first time, it wasn’t classical.

“I had zero understanding of rhythm,” Kanno recalls in a 2014 interview with Redbull Music Academy, “so after seeing a friend’s drum set for the first time [in college], I was like, ‘Woooow! What is that?! Hold on, what are you doing? What is this? How do you play it?’ I was shocked, so I ended up joining the friend’s band elective. I later found out that drums aren’t things which are extremely rare [laughs].” 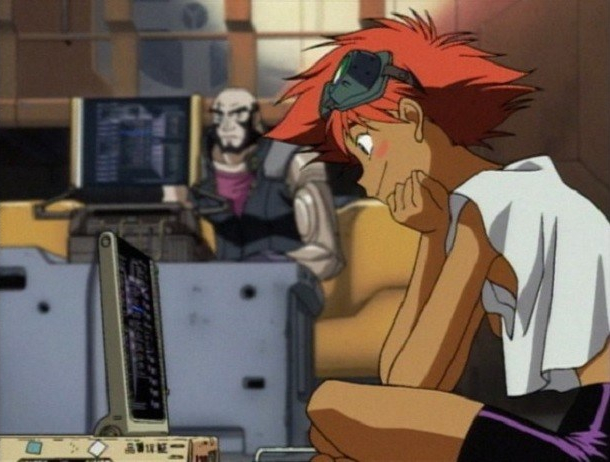 The happy-go-lucky, cat-like behavior of the character Ed was inspired in part by the personality of Yoko Kanno. Photo credit: Nerdist

Kanno’s late-blooming interest in non-classical music resulted in her taking an eye-opening trip to the United States. Greyhound-busing from coast to coast, Kanno made a stop in New Orleans to listen to jazz and funk. This exposure to international beats and grooves became particularly useful years later when composing Cowboy Bebop.

In listening to Kanno’s work on Bebop, you’ll hear things that you’d never think would play back to back. The bopping, pure-jazz sound of “Rush” doesn’t anticipate the otherworldly choir voices of “Green Bird,” which in turn has nothing to do with the pop-rocking “Want it All Back.” It makes sense then that Kanno’s collaborators have come to view her as a musical “chameleon,” as vocalist Steve Conte states in Rose Bridges’ Yoko Kanno’s Cowboy Bebop Soundtrack. Like tools from a workbench, melodic and structural materials from any genre are all fair game for Kanno when scoring a project.

While you might think the variety of sounds and ensembles from Kanno would be thematically problematic with a show that’s essentially a space-western, the tone of Cowboy Bebop is often just as formless as its music. The show’s director, Shinichirō Watanabe, aimed to create a work that centered around improvisation, both in its themes and actual production. It's for this reason that episodes of Cowboy Bebop weren’t labeled as episodes, but instead as “sessions,” just as actual bebop musicians would conduct.

In fact, one of the few parts of Bebop that was planned well in advance was its music. Even before visual production of the show began, Kanno delivered tracks to Watanabe that came from her emotional impression of aspects of the show, instead of beat-for-beat plot descriptions. This in turn inspired the visual style of Cowboy Bebop when it finally came time to animate it. 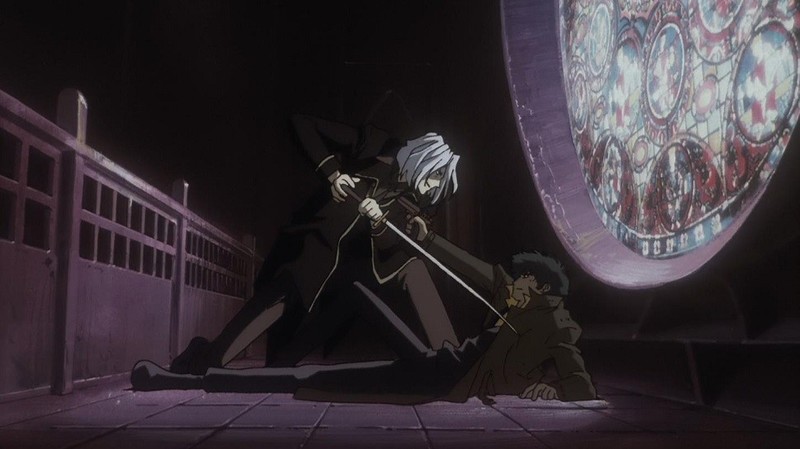 Though the series is a drama at its core, the adventures of the bebop crew include (but are not at all limited to) helping out a heavy-metal space trucker, searching for a bandit chess master, and fighting off an alien life form that grew inside their refrigerator. No matter how serious or silly the show gets, Kanno’s ability to call upon different elements of genres or emotions is unparalleled.

It's not often you can say this about art in any medium, but anime truly doesn’t get much better than Cowboy Bebop. Its fusion of high drama and lighthearted fun, as well as its mix of eastern and western influences, makes it a work unlike any since its creation. Kanno’s soundtrack—which places just as much importance on music boxes as it does grand pianos—captured the dynamism of the show with music that to this day remains timeless. Like Cowboy Bebop itself, Yoko Kanno is a true original.

Celebrating the series’ 20th anniversary year, the one-off film Cowboy Bebop: The Movie is set for a short re-release into select theaters nationwide August 15 - 16, including at Austin’s Alamo Drafthouse Mueller and Lakeline.

For a much more in-depth look at Kanno, her influences, and her work on Cowboy Bebop, check out the book Yoko Kanno’s Cowboy Bebop Soundtrack by Austin-based musicologist Rose Bridges, available on Amazon.