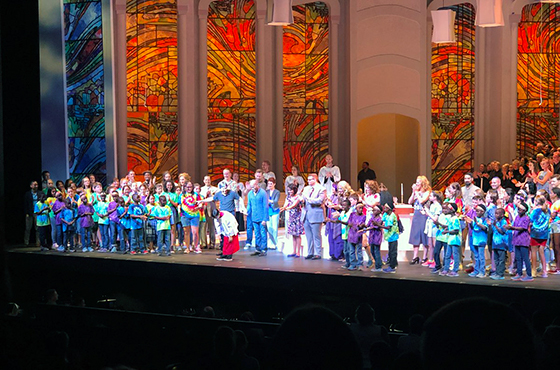 The cast of Mass takes a bow at the Long Center for the Performing Arts. Photo credit: myscena.org

KMFA brings you our annual round-up of the best news, arrivals, and performances in the Austin classical community from the last year.

1. Austin Soundwaves Spring Concert: After Draylen Mason died tragically at age 17 in the Austin bombings of March 2018, his fellow musicians in Austin Soundwaves dedicated their spring concert to the memory of this charismatic and gifted double bass player. Mostly through tears, joined by local professional musicians and faculty, they gave an unforgettable performance of “Nimrod” from Elgar’s Enigma Variations. The Hispanic Alliance, parent organization to Austin Soundwaves, has established the Draylen Mason Fellowship to help further the work of promising high school musicians.

2. KMFA goes national: Sara Schneider’s long-running Sunday morning program, Early Music Now (formerly Ancient Voices), was offered in syndication thanks to a new partnership with the WFMT network/Chicago. It has proven popular; now over 109 outlets are carrying the sounds of Buxtehude and Bach, and the name of KMFA, across the U.S. as well as Australia and the Philippines.

3. Bernstein Mass: The hundredth birthday of Leonard Bernstein was celebrated with the largest performing arts collaboration in Austin history, skillfully assembled by Merick Strategies under the artistic and musical leadership of Peter Bay.

4. Dream, Austin Classical Guitar: Executive Director Matthew Hinsley has been expanding the boundaries of his organization with adventurous multi-media projects. This summer’s Dream incorporated the words, hopes, and visions of young children with evocative music to moving effect.

5. Joshua Bell in recital: If we gave an award for the concert with the fewest coughs, this would be it. You could have heard a pin drop throughout this gorgeous performance by the beloved violinist. The deeply attentive audience included very young children as well as adults, as Mr. Bell noted in his remarks. Thanks to the Long Center for the Performing Arts for bringing him back to Austin!

6. ASO on the air: This year the Austin Symphony Orchestra joined the lineup of KMFA Listen Local partners. Our listeners can now hear ASO concerts in delayed broadcast the week after each live performance, a wonderful way to extend the sound of our local orchestra into homes of those who are unable to attend the concert.

7. Conspirare at Washington National Cathedral: One of Austin’s finest moments in classical music took place in the nation’s capital, when the ashes of Matthew Shepard were laid permanently to rest in Washington National Cathedral. Members of Austin-based choral ensemble Conspirare under Craig Hella Johnson performed excerpts from his original composition, “Considering Matthew Shepard,” which had its premiere here in 2016 and has since been touring nationally.

8. How To Marry A Millionaire: The Texas Early Music Project is brilliant at taking on rarely performed period gems—this season featured a delightful performance of Pimpinone, Telemann’s comic opera about a wealthy fellow who falls for his chambermaid.

9. Austin Opera’s Otello: Austin Opera launched its new season at the Long Center (and KMFA’s 10th anniversary as broadcast sponsor) with a festive concert version of Verdi’s great late masterwork. The cast, chorus, and orchestra came together in a vivid performance that confirms the dynamic growth this wonderful company is achieving under Annie Burridge’s leadership.

10. Happy Birthday Sightlines: Not a performance, this listing recognizes the first anniversary of the founding of Sightlines, the online arts journal founded by Jeanne Claire Van Ryzin to fill the void created when the Austin American Statesman decided arts coverage wasn’t important enough to warrant a full-time writer. Sightlines provides essential news and in-depth coverage of all the arts in Austin, including classical. Kudos to Jeanne Claire for her entrepreneurial spirit – you can subscribe to Sightlines for free at sightlinesmag.org.