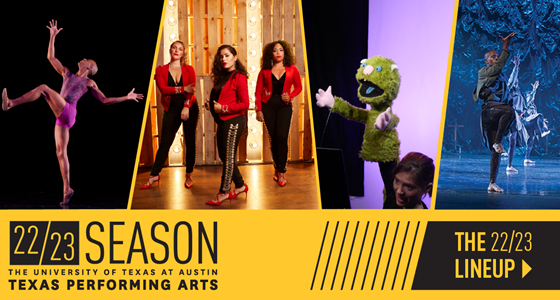 Texas Performing Arts unveiled an all-new 2022-23 season with a lineup of 15 events curated by Executive and Artistic Director Bob Bursey, the new season is reflective of Austin’s expanding role as a global site of innovation and creation, building on the organization’s legacy as one of the most significant university arts centers in the country.

Highlights of the new season include:

· A bold return to presenting international artists, with representation from nine countries.

· A strong commitment to large-scale dance work, with visits from four major companies.

· Continuing the Texas Performing Arts artist-in-residence program created during the pandemic, with support for three artists of international renown who are based in the Austin area: interdisciplinary artist and creative director Kenyon Adams, playwright Virginia Grise, and choreographer Deborah Hay.

· A new series of creative performance for young audiences and families