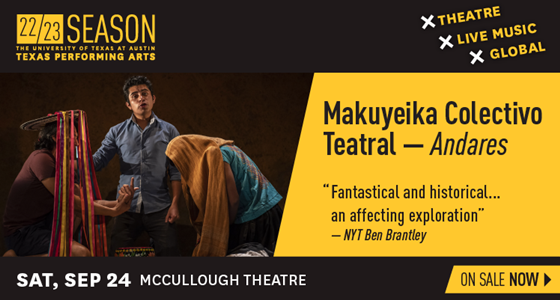 Andares is a theater creation about the lives of indigenous youth in México, devised collectively through personal anecdotes, ancestral myths, as well as traditional music and art forms. The play shines light on a range of realities — land usurpation, widespread violence, ancestral duties, community resistance, — that indigenous people face at the crossroads of modern life and tradition. Meaning “pathways,” Andares is a genuine, eye-opening, and intimate close-up on Mexico’s most remote corners and the extraordinary stories of its humble, everyday inhabitants.

The work is performed in Spanish and Indigenous languages with English supertitles.

Makuyeika Colectivo Teatral is a theater company dedicated to creating original works currently centered on the narratives and theatricalities of Mexico’s Indigenous people, touching themes of social, cultural, and human value with keen, artistic sensibility. Meaning “wayfarer” in the language of the Wixarika people, Makuyeika was formed after an extensive search across the country’s Indigenous communities, a project undertaken by Héctor Flores Komatsu as an inaugural recipient of the Julie Taymor World Theatre Fellowship.

Texas Performing Arts is the performing arts presenting program of The University of Texas at Austin and operates campus venues including Bass Concert Hall and McCullough Theatre.  It is the home of the Lexus Broadway in Austin series. In calendar year 2019 Bass Concert Hall had the highest number of tickets sold of any theater in Austin, was #2 in the State of Texas and #22 in the world, according to industry publication Pollstar. Following a national search, Tony Award-winning producer Bob Bursey was appointed Executive Director in January, 2020.