Host Brian Satterwhite takes the listener on a passionate tour of film music from around the globe. Each show is organized with a central theme or "focus," offering the listener a unique perspective of this fabulous world. 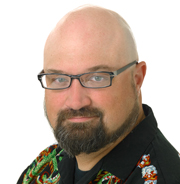 “I’m a filmmaker, not a musician,” says Brian Satterwhite, an award-winning film composer and conductor based in Austin, Texas. He earned a Bachelor of Music with dual majors in Film Scoring and Composition from the Berklee College of Music in Boston, Massachusetts. Brian has written scores for over one hundred short and feature films including SUSHI: THE GLOBAL CATCH (2012), SWITCH (2012), MAN ON A MISSION (2012), CELL: THE WEB SERIES (2010), ARTOIS THE GOAT (2009), QUARTER TO NOON (2008), THE CHILDREN'S WAR (2008), COWBOY SMOKE (2008), MR. HELL (2006), and the award-winning IMAX™ film RIDE AROUND THE WORLD (2006). Brian’s accolades include twelve gold medals and four silver medals from the Park City Film Music Festival. A dedicated disciple of his craft, Brian devotes copious amounts of time writing, lecturing, and teaching various film music related topics.

Brian’s filmic pursuits have not been limited to just music. He has also become smitten with film editing, having cut (and scored) the internationally acclaimed short film QUARTER TO NOON (2008) which has screened in twenty-two countries. He also served as an assistant editor on two major documentaries released in 2011.

06-28 It's Hard To Say Goodbye 06-21 Heavy Mental 2: Back in the Asylum View show archive
Hosts
KMFA Programs
National Programs
Update Required To play the media you will need to either update your browser to a recent version or update your Flash plugin.